I joined the cadet program when I was 12 years old because my best friend was in it and I thought it would be awesome.  The cadet program teaches you discipline, responsibility, leadership, fitness, compassion, and about the Canadian Armed Forces.  When I turned 14 years old I was in my third year of the program and I had set the goal for myself to be the Coxswain of 140 Cayuga.  This was one of my biggest goals of my life because not only do you have to work for the ranks and the position, you also have to be completely committed to the corps and program.

Between the ages of 13 and 18, I have successfully completed the seamanship trade at HMCS Quadra, two spring deployments, participated and completed a Canadian Coast Guard deployment, and have received a significant number of awards and recognitions.

In January 2017, I completed my Chief boards and was appointed Coxswain of 140 Cayuga.  Being the Chief of the corps is a journey, but it would be a lot harder if I didn’t have the support of my officers and my seniors.  In March 2018, I was one of the top 5 Sea Cadets in Alberta running for Top Cadet in Canada.  After my interview with the board, I was then chosen for Top Sea Cadet in Alberta.  This year was a special year for the Top Cadets in each province because they flew all of us to Ottawa for the 100th centennial.  It was cool because we got to meet everyone, get to know how different corps are operate, and learned what experiences they have encountered.

We also got the opportunity to help the Navy League of Canada and tell them our opinions and ideas about how to improve the cadet and navy league program.  Being in the cadet program has shaped me in many ways, it has allowed be to grow, become a better leader, and connect/meet new people. Without this program, I don’t know where I would be. 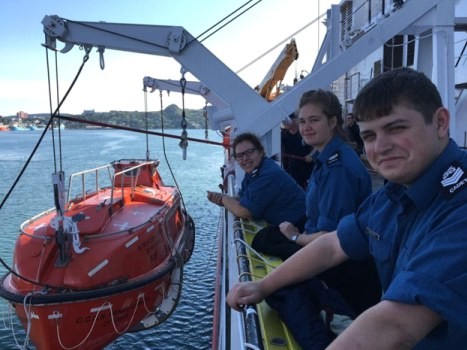